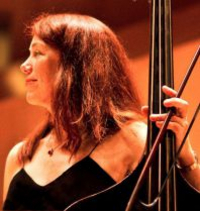 Margaret Urquhart studied double bass and violone with Anthony Woodrow and viola da gamba with Anneke Pols at the Royal Conservatory in The Hague. After completing her studies  she became a member of many notable baroque ensembles including La Petite Bande conducted by Sigiswald Kuijken, the Amsterdam Baroque Orchestra (Ton Koopman), the Leonhardt Consort (Gustav Leonhardt) and  Collegium Vocale Gent (Philippe Herreweghe).
Since 1986 she has been a member of the Orchestra of the Eighteenth Century and has been active as a chamber music performer taking part in many, radio, tv and CD recordings.