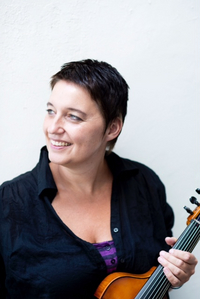 Antoinette Lohmann (Amsterdam, 1969) studied the violin, the viola and the baroque violin at the Conservatorium van Amsterdam. She has been active in varied musical areas and her experience includes Argentinian tango, salon music, folk music and contemporary music. As a freelance player, she has performed and recorded with many orchestras and ensembles overthe years. Currently her repertoire stretches from the early seventeenth century to the 21st century, but always on period instruments. She has a special interest in unusual instruments such as the viola d' amore, the tenor violin and the viola pomposa and exploring their repertoire. Since a few years she has also been an advocate of performing contemporary compositions for
early instruments.

In recent years she has focussed primarily on chamber music, with special emphasis on Dutch repertory. She recorded the complete sonatas for piano and violin by Joseph Martin Kraus and Margarethe Danzi, bassoon quartets by Franz Danzi and Krommer, chamber music by Belle van Zuylen (Isabelle de Charrière) and Dutch music from the early Baroque period.

In 2008 Antoinette founded her own group, Furor Musicus. Several recordings of this group have been released since; transcriptions of works by J.S .Bach, among them Antoinette's reconstruction of a Bach viola concerto and an early version of the b minor suite for strings, and the violin sonatas opus 1 & 2 by the Dutch Baroque composer Jacob Nozeman. Recently the group released the CD Phantasia Musica, with unknown German and Austrian repertoire from the seventeenth century. The CD received highest ratings in several magazines and
newspapers.

Antoinette teaches Baroque violin, viola and historical documentation at the Utrecht Conservatorium and is the principal teacher of the Historical Performance Department as well. Starting September 2017, she will be teaching at the Conservatorium van Amsterdam as well. Since 2008 she has been visiting South-Africa regularly to give concerts and, most of all, to teach in order to support the development of a historical performance movement.