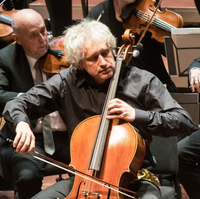 Albert Brüggen studied with Elias Arizcuren and Dimitri Ferschtman at the Sweelinck Conservatory in Amsterdam, now the Conservatorium van Amsterdam, where he graduated in 1993. During his studies he was principal cellist of the Dutch National Youth Orchestra. He attended several masterclasses and won second prize at the international Tromp Cello Competition in Eindhoven in 1992.

After graduation Albert Brüggen concentrated more and more on historical performance practice. A much sought-after soloist and continuo player throughout Europe, he has performed with almost all major early music ensembles. He is principal cellist of the Orchestra of the Eighteenth Century, Musica Alta Ripa in Hannover, and Cantus Cölln in Cologne. Additionally he has performed the cello concertos by Schumann, Haydn and Robert Volkmann as a soloist with the Orchestra of the Eighteenth Century. He also contributed to numerous CD recordings. In 2013, he was a guest at the prestigious Early Music Festival in Melk, Austria, where he performed and recorded Bach's six Solo Suites.

As a teacher, Brüggen has been involved in the renowned summer course Woudschoten for chamber music since 1998.