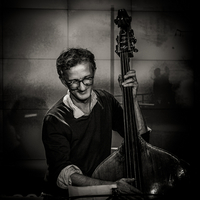 Wilmar de Visser (Den Helder, 1972) studied double bass with Peter Stotijn at the Hogeschool voor de Kunsten Utrecht, graduating with  a '10', the highest mark, in 1997. In addition to his position as second solo double bassist with the Radio Philharmonic Orchestra he plays the double bass and guitar in the Netherlands Wind Ensemble and countless other orchestras, ensembles and bands, many of which he has been the founder of.

Blessed with a broad musical taste, he performs with such diverse top artists as the Kenyan singer Ayub Ogada, soprano and conductor Barbara Hannigan and cellist Jordi Savall in concert halls from Amsterdam (the Netherlands), Vitoria (Brazil), New Delhi (India) to Cotonou (Benin).

He is the founder of Splendor Amsterdam, winning the Amsterdam Prize for the Arts in 2015, and co-founder of Ludwig, which was awarded a Grammy in 2018, proving that he is at the forefront of successful innovations and new developments in the music business both at home and abroad.