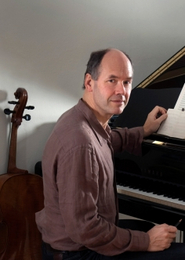 Willem Wander van Nieuwkerk (Amsterdam, 1955) specialised in 20th-century music and music psychology, but quickly devoted himself solely to the writing of music. Over the years he has composed a broad range of works, incorporating elements from early music, Classial forms, pop music, non-Western music, and contemporary rhythms.

The season 2007-2008 saw the premiere of Over the Water, a quintet for guitar and string quartet, in London at the International Guitar Festival, and in 2009 the Atlantic Trio played Van Nieuwkerk’s  pianotrio. In 2010-2011 he wrote, among other works, the Bergidylle  for the Trio Amare, and in 2012 a sonata for violin and piano for the Duo Philippens and Van Nieuwkerk.

Furthermore, he teaches History of 20th-Century Music and New Music at the Conservatorium van Amsterdam. For several years he was a member of ARTI, a research group at the Amsterdam University of the Arts, led by lector Henk Bergdorff, with which he researched the relations between pure music and music as a theater art