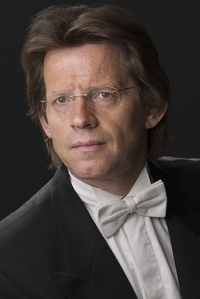 Theo Wolters (1955) studied trumpet at the Maastricht Conservatory and graduated with distinction. During his studies, from 1975 to 1979, he was first trumpet at the Overijssel Philharmonic Orchestra and the Essener Philharhomic Orchestra in Germany. From 1979 to 2008 he was a member of the Royal Concertgebouw Orchestra.

From 2004-2012 he was assistant-conductor to Mariss Jansons with the Royal Concertgebouw Orchestra in Amsterdam, which gave him a unique chance to hone his conducting at the highest level. In June 2008 he was given the opportunity to replace Mariss Jansons during two concerts with the Concertgebouw Orchestra. On these occasions he conducted Messiaen’s Turangalîla Symphony, to universal acclaim.