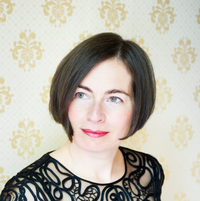 Mezzo-soprano Sára Gutvill (Budapest) studied German literature and linguistics at the Universität Wien in Vienna, Austria, and later classical singing at the Conservatorium van Amsterdam as a student of Pierre Mak.

Sára mainly performs chamber music, German Lied and oratorio. She has been singing with Collegium Vocale Gent since 2014. She is as passionate about teaching as she is about singing. She currently teaches German as second language and the course Performing Arts - Music at the Amsterdam University College.

Since 2013, Sára has been successfully combining her two studies and specialties as a German teacher and coach for singers at the Conservatorium van Amsterdam and, from 2019 on, at the International Opera Academy in Ghent. In the past years she worked as a language coach at the Nederlandse Reisopera, the Dutch National Opera Academy, BarokOpera Amsterdam as well as at the yearly Vocallis Festival.