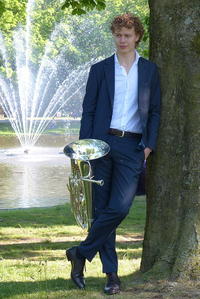 Rodin Rosendahl (1992) studied with Perry Hoogendijk at the Conservatorium van Amsterdam, graduating from both the bachelor’s and the master's degree programmes. Additionally, he took lessons with euphonium virtuoso Steven Mead at the Royal Northern College of Music, Manchester.

In 2012 Rodin was invited to participate as ‘Emerging Young Soloist’ in the International Tuba/Euphonium Conference in Linz. In 2017 he reached third place at the International Euphonium/Saxhorn Competition in Tours, France. Furthermore, he won prizes at various brass band competitions.

In 2017 Rodin joined the 'Marinierskapel der Koninklijke Marine' (concert vand of the Royal Navy) as euphonium player. Befre that he was a member of the ‘Fanfare Bereden Wapens’ of the Royal Netherlands Army. Additionally, he plays as a subsitute with several professional orchestras, including the Royal Concertgebouw Orchestra and the Rotterdam Philharmonic Orchestra.

Since 2017 Rodin has taught euphonium at the Conservatorium van Amsterdam.