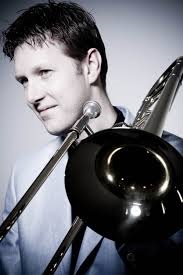 Remko de Jager (Heeg, 1971) studied at the Rotterdam Conservatory with George Wiegel, graduating with distinction in 1998. Hij took masterclasses with Bart van Lier, Michel Becquet and Victor Sumerkin. During his studies he worked as a substitute with every professional orchestra in the Netherlands. He participated in competitions at home and abroad, where he won numerous prizes. With the Rotterdam Trombone Quartet he reached the final of the prestigious Concert Artists Guild Contest in New York.

Since 1997 Remko has been a member of the Rotterdam Philharmonic Orchestra. Additionally, he performs as a soloist and a chamber musician with the New Trombone Collective, the Doelen Ensemble, and the Trombone Quartet of the RPhO, Domestica Rotterdam.

In 2011 he was appointed principal subject teacher of trombone at the Conservatorium van Amsterdam, after having held the same position earlier at the Rotterdam Conservatory. In 2009 he gave masterclasses and a recital at the Yonsei University in Seoul (Korea).