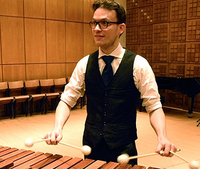 Ramon Lormans is one of the most popular classical marimbists and percussionists of his generation. He regularly performs in all major venues in the Netherlands and has given master classes and recitals in Antwerp, Detmold, Donaueschingen, El Espinar, Köln, Krakow, Luxembourg, New York, Paris, St. Petersburg, Tbilisi, Tokyo and at the Zeltsman Marimba Festival. With Eva van Grinsven, he forms the duo Sax & Stix. He is also a member of Lunapark, Temko Music, Duo Houdijk-Lormans and Ensemble Stage Animals.

Ramon studied at the Young Talent class of the Fontys Conservatory from 1998 until 2001. From 2008 to 2010 he took lessons at the Academy of the Royal Concertgebouw Orchestra, in addition to his studies with Peter Prommel, Victor Oskam, Walter van Hauwe, Willem Brons and Bart Schneemann at the Conservatorium van Amsterdam. In 2010 he graduated with distinction from the CvA's master degree programme. He won prizes at the Princess Christina Competition (2004), Tromp International (2006), Chamber Music Almere (2007), Vriendenkrans Competition (2008). In 2012 he won the Grachtenfestival Prize.

In 2005 Ramon established the Percussion Friends Talent Class for extremely talented young percussionists. He has been a teacher of marimba at the Conservatorium van Amsterdam since 2007.