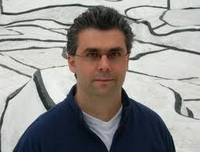 Rafael Reina has composed music for three operas: Wölfli – a journey into chaos (2001), a part of the collective opera 1714 Mon de Guerres, a co-production of Festival de Peralada and Barcelona Forum 2004, and HesseIndia (2007). His extensive oeuvre of ensemble pieces has been performed throughout Europe, the USA, Taiwan and India.

Rafael Reina is a senior teacher at the Conservatorium van Amsterdam. After extensive studies in the theory of Karnatic music with Jahnavi Jayaprakash and N.G. Ravi in South India, Rafael Reina developed the successful programme 'Contemporary Music through Non-Western Techniques' and its introductory course 'Advanced Rhythm' at the Conservatorium van Amsterdam. The programme, designed for both composers and performers, is followed by over two hundred students and is considered to be both a Bachelor’s and a Master’s subject. Rafael Reina has recently completed a PhD at the University of Brunel, London, on the pedagogical and creative applications of Karnatic rhythmical structures to Western music.

With a background in both jazz and contemporary classical music and an extensive knowledge of many musical cultures and their translation to Western purposes, Rafael Reina has given master classes at numerous higher music education centers throughout Europe and beyond, most recently at Cambridge University, Leeds College of Music, Birmingham Conservatoire, ESMUC in Barcelona and the Academy of Music in Tallinn.