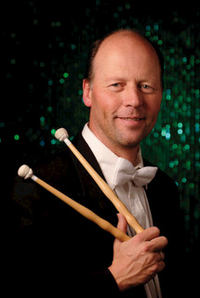 Peter Prommel studied percussion with Jan Labordus and Jan Pustjens at the Conservatorium van Amsterdam. Additionally, he studied marimba with Leigh Howard Stevens and Keiko Abe. He won several prizes for his marimba-solo playing, such as the ‘Laureate of the Concertgebouw and the Concertgebouw Orchestra’ and prizes at the Gaudeamus International Interpreters Competition (1985) and the ARD Wettbewerb (1987).

Peter Prommel was solo-percussionist with the Concertgebouw Orchestra and the Radio Philharmonic Orchestra. He has been a member of the Percussion Group Amsterdam as a percussionist, composer and conductor for ten years. With the Netherlands Wind Ensemble he has performed all over the world.

Since 1999 he has taught marimba, percussion, timpani and ensemble at the Hochschule für Musik in Detmold (Germany) and marimba at the Conservatorium van Amsterdam. Peter was a member of the jury at the Leigh Howard Stevens Marimba Competition in 1999, and in 2002 he served as a jury member at the Percussion-Trio edition of the International Percussion Competition Luxembourg.