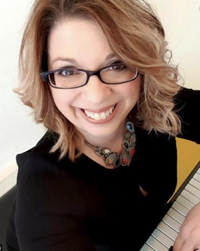 Canadian Nathalie Doucet enjoys an international career as an accompanist and vocal opera coach. Her years of experience have seen her career rapidly grow and have allowed her to coach and play for many opera companies, young artist programmes, and universities in Canada, the United States, and Europe, including DesMoines Metro Opera (Music Director for Opera Iowa), Orlando Opera (Young Artist Program Director and Orlando Youth Opera Director, Rehearsal Pianist), University of Tennessee (Faculty Coach), and Knoxville Opera Company (Principal Coach). Furthermore, she is regularly invited to be on the faculty of many summer programmes in places such as Ontario (Canada), the Summer Opera Lyric Theater and the Highlands Opera Studio in Oberaudorf (Germany), Music Theater Bavaria in Graz (Austria) for the American Institute of Musical Studies, and the Center for Opera Studies (C.O.S.I.) in Sulmona (Italy), all alongside highly respected colleagues.
In Canada she has worked for Opera in Concert, Toronto Operetta Theatre, Summer Opera Lyric Theatre, Opera York, Queen of Puddings, and Tapestry New Opera Works. She has been on the faculty of York University as a piano instructor and collaborative pianist, and has been a coach and collaborator at the University of Toronto.