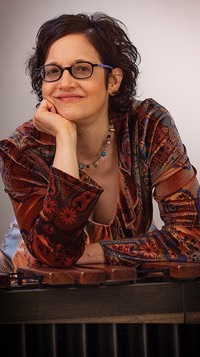 Nancy Zeltsman is a leading marimba performer, teacher, and festival director. She has premiered over 125 solo/chamber marimba works including compositions by Paul Simon, Michael Tilson Thomas, Gunther Schuller, Carla Bley, Louis Andriessen, and Alejandro Viñao. From 1985 to 1996, Nancy was a member of the duo Marimolin with violinist Sharan Leventhal—with whom she has again performed occasionally since 2015.

Nancy Zeltsman has taught marimba and chamber music at both Boston Conservatory at Berklee (where she has directed the percussion department since 2005) and Berklee College of Music since 1993. Since 2001, she has been Artistic Director of Zeltsman Marimba Festival (ZMF): an annual two-week seminar held in a different location each summer. Since 2013, Nancy is regular guest professor of marimba at the Conservatorium van Amsterdam.

Her method book, Four Mallet Marimba Playing: A Musical Approach for All Levels (Hal Leonard Corporation) is widely used. She edited Intermediate Masterworks for Marimba: 24 marimba solos presented in two volumes, commissioned through ZMF with support from over 200 contributors (C.F. Peters Corporation). Nancy Zeltsman was a jury member for the Tromp International Percussion Competition in Eindhoven, the Netherlands in 2010, 2012, 2014, and 2016.