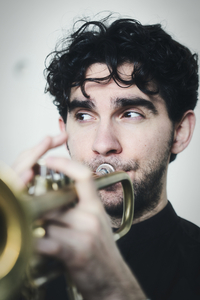 Miroslav Petkov (1989) is principal trumpet of the Royal Concertgebouw Orchestra. Alongside his orchestral career he is an active trumpet soloist playing diverse genres and styles.

Miroslav studied with Max Sommerhalder at the Hochschule für Musik Detmold, Germany, where he began to have great success with the trumpet, winning prizes at world-class competitions such as The ARD-Musikwettbewerb and the YAMAHA International Trumpet Contest in Germany, the Jeju International Brass competition in South Korea and the Citta di Porcia International Competition in Italy.
Before joining the Royal Concertgebouw Orchestra in 2016 Miroslav served as principal trumpet of the National Theatre Mannheim, Germany, as well as playing guest principal with various ensembles and orchestras, for example Ensemble Modern, Gewandhaus Orchester Leipzig, Accademia Nazionale di Santa Cecilia in Rome and the NDR Elphilharmonie Orchestra.

Miroslav’s interest in playing folklore music began in his childhood in Varna, Bulgaria. Developing and combining it with various genres including jazz and contemporary music has given him the freedom to play with different musicians and in different settings on stages worldwide.