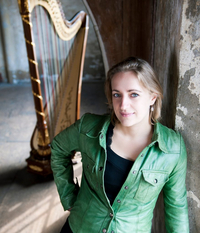 Miriam Overlach studied with Erika Waardenburg at the Conservatorium van Amsterdam, graduating with distinction in 2006. After her graduation she embarked on a career in which she moves between musical genres and scenes, taking on diverse roles as performer, initiator and artistic director.
Already during her studies Miriam won first prizes at the International Harp Competition Martine Géliot, the Dutch Harp Competition, the Grachtenfestival Conservatory Competition, the Vriendenkrans Competition, including the prize of the Dutch Radio to record her solo-debut cd. She was semi finalist of the Harpcontest in Israel and participated twice in the Lucerne Festival Academy under the direction of Pierre Boulez.

Rooted in the classical music tradition, Miriam regularly performs as a soloist, chamber musician and together with orchestras at festivals and concert venues throughout Europe. She works regularly with ensembles and orchestras like Ensemble Modern, the Royal Concertgebouw Orchestra, the Netherlands Philharmonic Orchestra and the National Opera. She is co-founder and artistic director of Ensemble Lumaka (flute, harp, and strings). Over the past few years, she has initiated several projects, such as MoNUmenten, a concert series in Amsterdam with music from the 1920s performed in iconic architecture from that period. Ensemble Lumaka often dives into archives to find forgotten repertoire from the inter-war years. They have released three CDs and were awarded several first prizes in international competitions.

For many years Miriam has been intensely involved in the contemporary music scene, playing new repertoire, improvising and working closely with composers to explore all different sides of her instrument. This led to a great number of new pieces being written for harp, with electronics, video, and dramatisation, which she has performed at festivals like November Music and Gaudeamus Music Week. Since 2017 Miriam has performed Stockhausen’s infamous harp duo Freude together with Marianne Smit, for whom Stockhausen wrote the piece. 2018 brought with it a new collaboration with free-jazz legend Anthony Braxton with whom she now regularly tours. More recent collaborations include a music theater show about Jean Arp and a solo harp concerto written for Miriam by Wilbert Bulsink which was premiered in 2018 and will be played again in 2019 with ASKO|Schönberg Ensemble, conducted by Bas Wiegers.

Miriam is frequently a jury member at harp competitions and gives regular masterclasses on contemporary music. In 2014 she founded www.composingforharp.com, a website with methodological videos explaining the fundamentals of harp playing. They are frequently watched by composers worldwide.