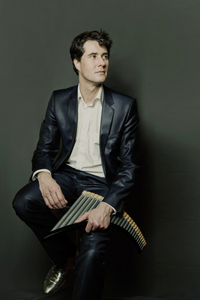 Matthijs Koene (1977) is internationally regarded as one of the leading panpipes players of his time. Shortly after graduating cum laude from the Conservatorium van Amsterdam he was appointed principal subject teacher of panpipes at this institution.
Matthijs is winner of several prestigious prizes. In 2003 he won the ‘Vriendenkrans’, ‘Concertgebouwprijs’ and the ‘AVRO Radio’ award. With his duo Verso, with guitarist Stefan Gerritsen, he won the prize for contemporary music of the Comradio competition in Barcelona (2003) and the IBLA Grand Prize Top Winner Award and the Piazzolla Award in Italy (2006). Twice the duo reached the final of The CAG music competition in New York, in 2005 en 2006.

A true pioneer, Matthijs' vision and manner of playing have vastly expanded the technical and expressive capabilities of his instrument, enabling the panpipes to make an entry into the classical music world. Over two hundred works have been written for him, many of which have been dedicated to him. Works for solo panpipes, chamber music, panpipes and organ and solo concertos, many of which have been composed by renowned composers such as Theo Loevendie, Roderik de Man, Daan Manneke, Guus Janssen, Klaas de Vries, Chiel Meijering, Gwyn Pritchard, Fabio Nieder, Calliope Tsoupaki, Martijn Padding, Klas Torstensson and Ron Ford.