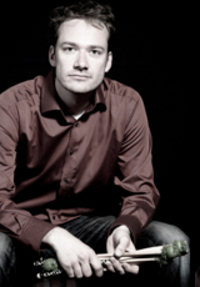 Mark Braafhart (1983) studied with Jan Pustjens, Nick Woud, Gustavo Gimeno, Lorenzo Ferrandiz and Victor Oskam and obtained his master's diploma in 2006. During his studies, Mark was already a substitute with most major Dutch orchestras; he played with the Royal Concertgebouw Orchestra for the first time when he was eighteen years old. In 2005 he won a position with the Rotterdam Philharmonic Orchestra, with Valery Gergiev as chief conductor at the time. Subsequently, Mark won the position of principal percussionist with the Royal Concertgebouw Orchestra in 2008, thereby succeeding his teacher Jan Pustjens.

Mark worked with most major conductors of our time, such as Bernard Haitink, Zubin Mehta, Riccardo Chailly, Nikolaus Harnoncourt, Mariss Jansons and Andriss Nelsons. He has played in all the major halls in the world. Furthermore, he plays chamber music on a regular basis, in the Netherlands as well as abroad.

Mark Braafhart teaches at the Conservatorium of Amsterdam, striving to educate, together with his colleagues of the CvA teaching team, the next talented generation of percussionists. He has given masterclasses in countries all over the world, including Korea, Costa Rica, Brazil and Spain.