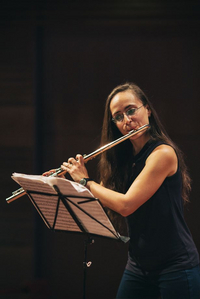 Mariya Semotyuk-Schlaffke hails from Lviv, Ukraine. She studied flute, improvisation, music pedagogy and modern music at the conservatories of Lviv and Leipzig with Irmela Boßler and others. She continued her studies with Renate Greiss-Armin in the soloist class at the Hochschule für Musik in Karlsruhe. In 2009 she was a finalist at the prestigious Kobe International Flute Competition and won the special prize for best interpretation of a romantic work.
Since 2007 Mariya has been second flutist with the Royal Concertgebouw Orchestra. She also performs frequently as a chamber musician.