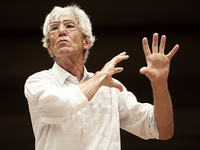 Lucas Vis (1947) is considered a specialist in contemporary music. He has worked with important composers such as John Cage, Mauricio Kagel, Karlheinz Stockhausen, Theo Loevendie, Louis Andriessen and many others. Also, he has conducted numerous premieres.

Vis began his musical career as a cellist. After winning a prize at a conducting course at the Mozarteum in Salzburg, he developed increasingly as a multifaceted conductor. From 1976 to 1979 he was the principal conductor of the ‘Nederlands Ballet Orkest’, for which he conducted performances of both classical and modern ballet; as a guest conductor he has led all Dutch orchestras, such as the Royal Concertgebouw Orchestra, the Residentie Orchestra, various radio orchestras and several ensembles, covering a wide-ranging repertoire. From 1988 to 1996 Lucas Vis was the principal conductor of the ‘Noordhollands Philharmonisch Orkest’ in Haarlem, where he appeared on stage conducting works from many different eras. At the Netherlands Opera he has conducted not only operas by Wolfgang Amadeus Mozart, Giacomo Puccini, Ferruccio Busoni, Bruno Maderna and Giuseppe Verdi, but also many premieres by such Dutch composers as Otto Ketting, Theo Loevendi and Guus Jansen. While working as an assistant to Bruno Maderna from 1967 to 1973, he was awarded the Koussevitzky Tanglewood Composition Prize in 1971.

From 1998 until 2005 Lucas Vis was Associate Director of the Conservatorium van Amsterdam, where he has been principal subject teacher in conducting since 2003. He frequently appears as a guest conductor of numerous European orchestras and ensembles and leads master classes in conducting.