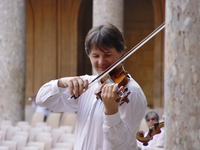 Liviu Prunaru studied with Alberto Lysy at the Menuhin Music Academy in Gstaad, Switzerland, and with Dorothy DeLay in New York. He was appointed principal violinist with the Royal Concertgebouw Orchestra in September 2006.

In 1993 Liviu Prunaru won the Prix International Eugène Ysaÿe, the Audience Prize, and second prize at the Queen Elisabeth International Music Competition. The winning of the Juilliard Mendelssohn Competition in 1999 led to his New York solo debut at Lincoln Center with the Juilliard Symphony. Subsequently, he has given solo performances with the Royal Philharmonic Orchestra and the London Symphony Orchestra, as well as recitals throughout the world.

Liviu Prunaru made his first solo appearance with the Royal Concertgebouw Orchestra in May 2008 in a performance of Saint-Saëns’s Violin Concerto No. 3. He returned as a soloist in the Dvořák Violin Concerto in December 2012 and in Piazzolla's Four Seasons of Buenos Aires in June 2014.

Liviu Prunaru plays a 1694 Stradivarius, financed by the Stichting Instituut Gak and specially on loan to him from the RCO donors’ foundation Stichting Donateurs.