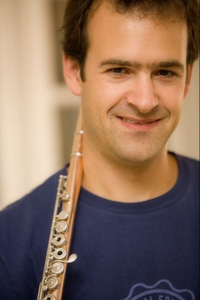 Kersten McCall studied with Felix Renggli at the Schaffhausen Conservatory in Basle and with Renate Greiss and Aurèle Nicolet at the Karlsruhe Hochschule für Musik. McCall won first prize at the 1997 Kobe International Flute Competition in Japan and third prize at the 2000 ARD International Music Competition.
McCall served as principal flautist of the Rundfunk-Sinfonieorchester Saarbrücken, also having played in the Berlin Philharmonic Orchestra, the Bavarian Radio Symphony Orchestra and the New York Philharmonic Orchestra. He was appointed principal flautist of the Royal Concertgebouw Orchestra in November 2005.
McCall co-founded the ensemble est!est!!est!!! in 1995 and has been a member of the Linos Ensemble since 2000.