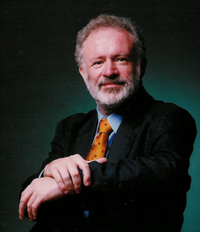 Kenneth Montgomery was born in Belfast. He was the Ulster Orchestra’s Principal Conductor from 2007 to 2010 and Principal Guest Conductor before that. He studied at the Royal College of Music in London.He was musical director of the Bournemouth Sinfonietta (1973) and two years later musical director of Glyndebourne Touring Opera.

In 1975 he became principal conductor of the Dutch Radio Symphony Orchestra and the Dutch Radio Choir (the Groot Omroepkoor) as well. He conducted a large number of performances for Dutch radio during his many years with the Orchestra and Choir. Many of his recordings are on CD. With Finghin Collins and the RTÉ/NSO he recorded a highly acclaimed CD of Stanford’s piano concerto. Kenneth is also well-known internationally for his work as a regular guest conductor with the main orchestras and opera houses. He recently toured with the Orchestra of the 18th Century to great acclaim. The orchestra will come to Dublin and Belfast for the first time coming November.

He was interim music director at the Santa Fe Opera where he conducted 20 productions since 1982. Last Summer he was named their Conductor Laureate. He returned to Santa Fe last Summer for Mozart’s Impresario and Stravinsky’s Rossignol. He was the first Artistic Director of the Dutch Opera Academy of the Conservatories of The Hague and Amsterdam. He continues to give conducting masterclasses.

In 2010 Kenneth was awarded an OBE in the Queen’s New Year Honours List for services to music in Northern Ireland and an Honorary Doctorate of Literature in Music (DLit(Mus)) from Queen’s University Belfast.