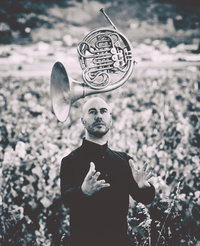 José Luis Sogorb Jover (1979, Pinoso, Spain) studied with Vicente Navarro at the conservatory Alicante and at the Royal Conservatoire of The Hague, where he obtained both his bachelor’s and his master’s diploma with distinction.
Having served as a member of Het Gelders Orkest for seven years, José Luis was appointed principal hornist at the Orquesta Sinfónica de Galicia in 2014. In 2016 he joined the Royal Concertgebouw Orchestra. He played as a substitute in orchestras from all over Europe, working with conductors such as Riccardo Chailly, Bernard Haitink, Valery Gergiev, Mariss Jansons, Zubin Mehta and Yannick Nézet-Séguin. Additionally he has given recitals and solo concerts in the Netherlands, Belgium, France, Brazil and Spain, where he gave masterclasses to young musicians.