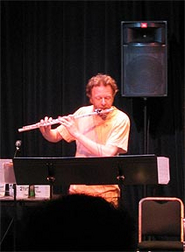 Jos Zwaanenburg graduated with distinction in 1985 from Amsterdam’s Sweelinck Conservatory, where he studied flute and composition. In the preceding year he was one of the prize-winners at the Gaudeamus International Interpreters Competition, receiving an honorary mention for his performances of his own compositions.

Jos has performed extensively throughout Europe, the U.S., South America, India, the Russian Federation and Japan, solo, as a member of various orchestras, as a soloist with orchestras and as a member of chamber music ensembles playing classical as well as improvised music, and on many radio and television broadcasts.

Jos is known for his research into extended playing techniques for the flute, in which he combines his interest in performance, theatre, composition and live electronics. In 1986 and 1987, Jos initiated the development of the open-hole alto flute, in collaboration with the Dutch flute makers Eva Kingma and Dirk Kuiper.

Currently he is a lecturer at the Conservatory of Amsterdam where he teaches live electronics and the Contemporary Music through Non-Western Techniques course. He is an International Research Fellow at Oxford Brookes University.