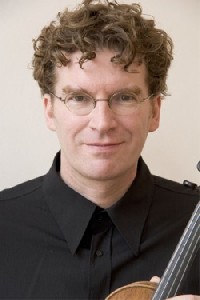 After his violin studies with Bouw Lemkes in Amsterdam and Josef Suk in Vienna and Prague, Johannes Leertouwer decided to specialize in historical performance practice. He worked as a concertmaster and soloist with a number of international period instrument ensembles and orchestras, such as Anima Eterna, and the orchestra and choir of the Netherlands Bach Society.

With the Schönbrunn Ensemble, of which he has been a member since its founding in 1987, he performs both in the Netherlands and abroad. He has also made a series of CD’s with this ensemble, the most recent of which contains works of Graf, Reicha and Ries. In 2006, the Mozart year, Johannes Leertouwer was the soloist and conductor in a highly acclaimed CD-recording of the complete works for violin and orchestra by Mozart.

Additionally, Johannes Leertouwer is active as chief conductor and artistic director of the Nieuwe Philharmonie Utrecht. In September of 2009, he conducted this orchestra in an exciting and much praised debut which featured a programme with Stravinsky and Ravel. In the coming years he will continue to lead the NPU in a series of concerts and special projects. The orchestra performs repertoire of the nineteenth- and early twentieth century on period instruments. Carrying clearly the signature of its chief conductor, it also features an extensive educational programme.

From 1989  to 2021 Johannes Leertouwer taught violin as a principal subject at the Conservatorium van Amsterdam. Currently he teachers various electives in the master's degree programme.