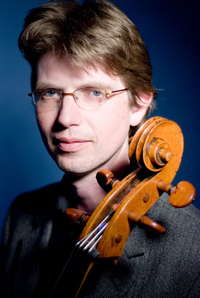 After completing his studies at the conservatory of Amsterdam with Dmitry Ferschtman, and in London with Christopher Bunting, Jeroen was principal cellist of the Cello Octet Conjunto Ibérico, a group with a worldwide reputation as a full time cello ensemble. Since 1999 he is a member of the Nieuw Ensemble, one of the leading Dutch chamber music groups for contemporary music. He is also a member of the Ruysdael Quartet.

He won several prestigious prizes, including the first prize in the Postbank Sweelinck competition in 1992 and the first prize of the Foundation of the Royal Concertgebouw, Amsterdam. He is a very active chamber music player, performing with musicians such as Janine Jansen, Isabelle van Keulen, Anner Bijlsma and Michael Collins, giving concerts all over the world.

Jeroen is teacher of cello at the conservatories of Amsterdam and Rotterdam. He gives regularly masterclasses in Russia, Israel and Germany and is the artistic leader of the Cello Festival in Zutphen, the Netherlands.