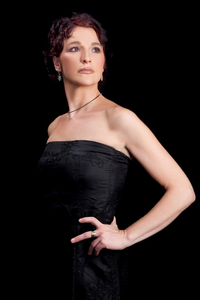 Having completed her musical studies in her native city, Zagreb (Croatia) with honours, Jelena Očić continued het studies at the Musikhochschule in Mannheim with the American-born cellist Michael Flaksman, where she is currently the youngest member of the string faculty. Among her students are winners of international competitions and members of major orchestras.

With het interpretations of the cello literature, from Beethoven to Ginastera, and contemporary composers, Jelena Očić leaves an unforgettable impression on her audiences. Not only Palm and Greenhouse, but also Leslie Parnas, Mischa Maisky, and Heinrich Schiff have inspired her to become a unique and powerful musical personality.

Yehudi Menuhin Festival, Kronberg, and Ascoli Piceno are some of the festivals at which she has appeared as a soloist or with chamber music ensembles. She has been featured with leading chamber orchestras such as Solisti di Zagreb, the German Chamber Orchestra, the Chamber Orchestra of Padua and the Veneto, and the Korean Chamber Ensemble, and with symphony orchestras throughout Europe.

Among her chamber music partners have been Konstantin Bogino, Ulrike-Anima Mathé, Vladimir Mendelssohn, Yuri Gandelsman, and the late Greenhouse, to whose memory her most recent Challenge CD - Beethoven’s Kreutzer Sonata - is dedicated. Numerous composers (Cornell, Šenderovas, Dott, Sorg, and Prohaska, among others) have dedicated their works to her. Her recordings with Federico Lovato for Challenge Classics of Beethoven’s Kreutzer transcription, sonatas by Ginastera, Hindemith, and Kabalevsky, as well as contemporary works, have been received with great acclaim by the critics.