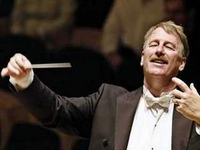 Jac van Steen studied orchestral and choral conducting at the Brabants Conservatory of Music. Starting with his participating in the BBC Conductors Seminar in 1985, he enjoys a very busy career, conducting the best orchestras in The Netherlands, the United Kingdom, Switzerland and Germany, which included holding the post of Music Director and Chief Conductor of the National Ballet of The Netherlands, the orchestras of Bochum and Nürenberg, the Staatskapelle Weimar, The Opera and Philharmonic Orchestra of Dortmund (Germany) Musikkollegium Winterthur (Switzerland) and Principal Guest Conductor for several years with the BBC National Orchestra of Wales and from 2013-14 the Prague Symphony Orchestra. He is also Principal Guest Conductor of the Ulster Orchestra in Belfast.

Jac van Steen made his debut with Opera North in 2013, conducting the production of Britten’s Peter Grimes - other highlights in 2013 were his concerts with the Philharmonia Orchestra, both on tour and in the Royal Festival Hall, as well as his debut with the Volksoper in Vienna with performances of Loriot’s Ring. Jac van Steen has participated in many recordings for the BBC, as well as live broadcasts of his concerts. There are a substantial number of CD recordings of his work with various orchestras (a.o. Dabringhaus & Grimm, SOMM, Bridge Records, NMC).

In addition to his activities as conductor he is dedicated to teaching and teaches conducting at the Royal Conservatory of Music in The Hague, where he has developped his brainchild: the National Master in Orchestral Conducting (NMO). He also regularly works with the Royal Northern College of Music and Chetham’s School of Music (Manchester) as well as the Royal Academy and Royal College of Music (London).