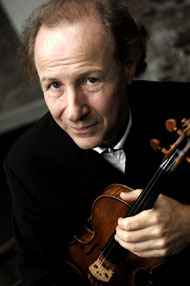 Born in Riga, Ilya Grubert studied with Yuri Yankelevich and Zinaida Gilels, and then with Leonid Kogan at the Moscow Conservatory. He earned his first international success at the Sibelius Competition in 1975. Subsequently, he won first prize in two prestigious international competitions, the Genova Paganini Competition and the Moscow Tchaikovsky Competitions in 1978.

He then embarked on a highly successful career, which has brought performances as a soloist with important orchestras, including the Moscow Philharmonic, St. Petersburg Philharmonic, the Russian State Orchestra, the Dresden Staatskapelle Orchestra, the Helsinki Philharmonic, the Rotterdam Philharmonic, and the Netherlands Philharmonic, working with conductors such as Gennady Rozhdestvensky, Maxim Shostakovich, Yuel Levi, Voldemar Nelson, and Mariss Jansons. His concerts have included tours in the United States, Canada, Australia, and throughout Europe. He has recorded for major record companies, with a repertoire that includes the Sibelius, Tchaikovsky and Bruch concertos and all Prokofiev’s violin compositions.

He now lives in the Netherlands, where he teaches at the Conservatorium van Amsterdam. He plays a 1740  Pietro da Venezia, formerly the property of Wieniawski.