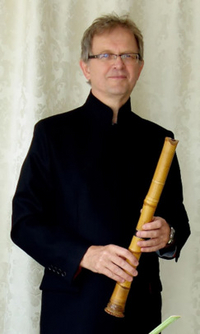 Harrie Starreveld is widely regarded as one of the world’s leading specialists in contemporary flute music, working with composers such as Carter, Donatoni, Ferneyhough, Yun, Boulez, Crumb, Harvey, Tan Dun, Loevendie, Weddington and Ton de Leeuw. In 1982 he joined the Nieuw Ensemble, and together with René Eckhardt and bass-clarinetist Harry Sparnaay he forms Het Trio.

As a soloist he performed a large number of flute concertos and worked with conducters such as Hans Vonk, David Porcelijn, Reinbert de Leeuw, Ernest Bour, Lucas Vis, Arturo Tamayo en Lev Markiz. Harrie Starreveld has been a teacher of flute as a principal subject at the Conservatorium van Amsterdam and in Bremen since 1980. He regularly gives masterclasses all over the world. In 1993 he was awarded the prestigious Edison award for his CD with works by Ton de Leeuw.