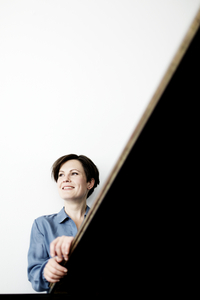 Hanna Shybayeva studied with Naum Grubert at the Royal Conservatoroire of The Hague, obtaining her master’s diploma with the highest distinction in 2005. Other teachers included Dmitri Bashkirov and Ferenc Rados. A prize-winner at many international piano competitions around the world, Hanna has a busy schedule participating in festivals and giving solo recitals as well as concert performances with orchestras in Europe, Russia and the US. She is also a partner in in both chamber and vocal music. Since 2008 she has been a member of the New European Ensemble, one of the most innovative, vibrant and versatile ensembles for contemporary music. In the same year she started a chamber music project, Symphonic Intimacy, together with the Ysaÿe String Trio, showcasing historical chamber music arrangements of symphonic works.

Hanna is very active in the field of recording and has brought out numerous critically acclaimed CDs, featuring a wide-ranging repertoire. Her duo CD Sounds of War, which she recorded with violinist Maria Milstein, was highly praised by the international press. It was chosen as one of the five best classical albums of 2015 by Dutch newspaper NRC and was awarded an Edison Klassiek 2015 in the category Chamber Music. Additionally, she is the first classical musician to have participated in the Studio Konzert Limited Edition vinyl series of the Bauer Studios/NEUKLANG. This live concert recording includes works by Couperin, Scarlatti, Chopin, Debussy, Gershwin and Kapustin. In 2019 she started a collaboration with Naxos Music Group to record all Beethoven Piano Concertos in chamber version by V. Lachner.

Hanna has held a position as teacher of piano at the International Anton Rubinstein Music Academy in Düsseldorf (Germany)/Kalaidos Hochschule (Switzerland) since 2013.