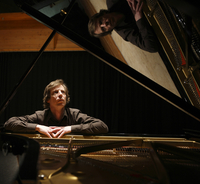 Frank van de Laar (1965, Laren) studied with Jan Wijnat the Sweelinck Conservatorium, where he graduated with the highest distinction in 1989. He continued his studies with Karl-Heinz Kämmerling in Hannover and with Naum Grubert in Amsterdam. In 1987 he won third prize at the International Brahms Competition in Hamburg. In 1988 he won first prize at the Postbank-Sweelinck Competition and made his debut in the Concertgebouw. Since then he has performed to critical acclaim the world over and has received many honours and awards.

His repertoire ranges from Bach to contemporary music, including lesser-known but interesting classical and new masterpieces. Additionally, he is very active in the field of chamber music. He has recorded more than twenty-five CDs and has made numerous appearances on radio and TV.

He is a principal subject teacher of piano at the conservatories of Amsterdam and Zwolle.