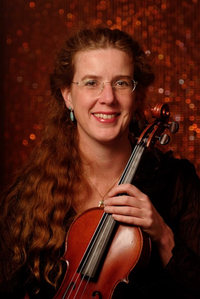 Francien Schatborn studied viola with Jürgen Kussmaul at the Sweelinck Conservatorium, Amsterdam, graduating with honours in 1995. Additionally took part in viola masterclasses with Tabea Zimmermann, Fjodor Drushinin, and Kim Kashkashian, and chamber music with Menahem Pressler and Istvan Parkanyi. In 1994 she was awarded the Zilveren Vriendenkrans of the Koninklijk Concertgebouworkest, together with pianist Jeannette Koekkoek, with whom she forms a regular duo. The duo has given concerts in the Netherlands, Italy, France, and the US, and released their first CD with romantic Dutch music on the label Etcetera in 2003. Their second CD with the complete viola sonatas by Röntgen was released on Etcetera in 2006. Both CDs were met with acclaim.

Francien Schatborn has been principal viola of the Radio Philharmonic Orchestra conducted by Jaap van Zweden since 1995. Furthermore, she is very active as a chamber musican. In addition to performing with the Nederlands Pianokwartet, she has given many concerts in Europe, the Americas, and Asia, with ensembles such as the Reizend Muziekgezelschap directed by Christiaan Bor. As a soloist she has performed with several orchestras, including the Radio Kamerorkest, the Noord-Hollands Philharmonisch Orchestra, Holland Symfonia, the Dutch Student Orchestra, and her own orchestra, the Radio Philharmonic Orchestra.