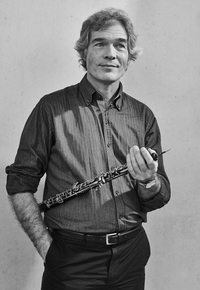 In 1983 he made his debut in the Concertgebouw Amsterdam with Richard Strauss’s oboe concerto. Since then he has given concerts with renowned orchestras and ensembles in Europe, Japan and the United States. He worked with conductors including Christopher Hogwood, Heinz Holliger, Emilio Pomarico, Mark Foster, Diego Masson, Ed Spanjaard and Jaap van Zweden. In 1994 he released his first solo cd with oboe concertos by Mozart and Haydn, recorded with the Concertgebouw Chamber Orchestra. Additionally he plays chamber music in various ensembles.

His love for modern music has resulted in the development of new oboe techniques. He inspired composers such as Luca Francesconi, Eric Verbugt and David del Puerto to write new works for him.

Ernest Rombout is a principal subject teacher of oboe at the Conservatorium van Amsterdam and frequently gives masterclasses in Europe.