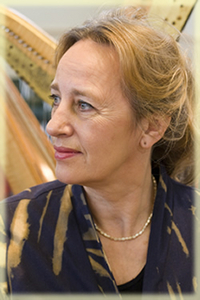 Erika Waardenburg has made her mark both nationally and internationally; as a soloist, performing works for harp and orchestra with conductors such as David Porcelijn, Graham Jenkins and Ernest Bour, as part of many chamber music ensembles but also giving recitals.

At the conservatories of Utrecht and Brussels she studied with Edward Witsenburg and Susanna Mildonian; she graduated with distinctions of the highest class: the Premier Prix and the Prix d‘Exellence. At the age of twenty-three she won the prestigious International Gaudeamus Concours for contemporary music and the Vriendenkrans, a distinction awarded by the concert hall of Amsterdam, Het Concertgebouw.

As a versatile harpist, Erika Waardenburg not only has the ambition to bring the often well-known romantic repertoire before a wide audience, but she is also interested in introducing the audience to lesser-known contemporary works. She furthermore encourages composers to write music for the harp.

Erika is a principal subject teacher at the conservatories of Utrecht, Amsterdam and Helsinki. Additionally, she gives masterclasses for young talented harpists both at homa and abroad, e.g. at the Mozarteum in Salzburg and the Royal Academy of Music in London. Her greatest accomplishment in her teaching career is the founding of the young talent class, enabling very young harpists to study under her guidance, raising their standards to unprecedented heights. Many national and international prizes are a testimony to her outstanding achievements as a teacher.