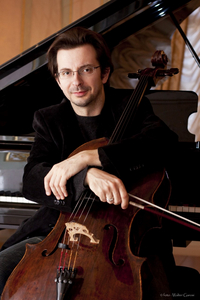 Emanuele Silvestri currently serves as principal cellist at the Rotterdam Philharmonic Orchestra. Previously he has been first chair of the Cello Section of the Israel Philharmonic Orchestra for ten years,  establishing himself internationally as a soloist and chamber musician of the highest calibre.

He has appeared as a soloist with many orchestras in Europe, including the Orchestra del Gran Teatro La Fenice di Venezia, Teatro alla Scala di Milano, the Basel Symphony Orchestra, the Pomeriggi Musicali di Milano and Milano Classica, conducted by, among others, Zubin Mehta, Riccardo Chailly, Christopher Hogwood, Diego Matheuz, and Gustavo Dudamel.

Former cellist and co-founder of the Quartetto d’archi del Teatro La Fenice di Venezia, he was regularly invited to be part of the famous contemporary music festival La Biennale di Venezia. After his moving to Israel, in 2011, he also joined for several years the Israel String Quartet, forming an intense musical relationship with the historical Israeli ensemble. With the Sestetto Leonardo and the Serenata Trio, he toured in 2005 throughout Italy, Albania, Argentina, Chile, Uruguay and Brasil.

At the Orpheus Konzerte in Zurich he won prizes in 1998-1999 as a member of the best chamber music ensemble. In Basel he won the BOG Basel Orchester Gesellschaft prize for Chamber Music in 1997, recording for the Swiss Radio. Furthermore, he was awarded many first prizes in Italy in cello competitions, and a second prize at the Domnik Preis International Cello Competition in Stuttgard in 1996.

Emanuele Silvestri has given masterclasses in Argentina, Brasil, Canada, Italy, Israel and China, and he is very active in music education and orchestra training, he has been part of many Youth Orchestra Academy initiatives, teaching for example at the Lanciano summer courses and the AYSO Orchestra Academy in Puglia (Italy). He has been part of the teaching team at The Buchmann-Mehta School of Music in Israel, where he also coached the cello section of the Buchmann-Mehta Symphony Orchestra, and taught at the Conservatorio di Musica A. Steffani di Castelfranco Veneto and the Tel Aviv Conservatory of Music Stricker.