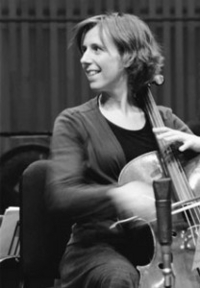 Doris Hochscheid studied with Dmitry Ferschtman and graduated with distinction from the Conservatorium van Amsterdam. Subsequently, she studied with Melissa Phelps in London and with Philippe Muller in Paris. She was awarded the ‘Prize for an outstanding cellist’ twice at the Tanglewood Festival in the United States.
Doris has been a member of Asko|Schönberg since 1996. With this ensemble, she played as a soloist many times, for example in the cello concerto by Ligeti and in world premieres of cello concertos written for her by composers such as Dimitri Andrikopoulos, Martijn Padding, Chiel Meijering, and Seung-Won Oh. Also, she is a member of the Stolz Quartet. With this group, she has frequently performed the successful music theater production A Love Unsung. She has performed as a soloist and in chamber music settings in various countries, and recorded a considerable number of CDs.

Over the years, Doris has developed a repertoire of more than a 120 pieces with pianist Frans van Ruth, ranging from the viola da gamba sonatas by J.S. Bach to a growing number of pieces specially written for the duo. Since 2007, Frans and Doris have developed a number of projects to promote the Dutch repertoire for cello and piano. The most significant of these projects has been the CD series Dutch Cello Sonatas. They recorded seven CDs on the German label MDG, which were awarded prizes both in the Netherlands and abroad. In 2016, they received the prestigious ECHO Klassik award for the series.