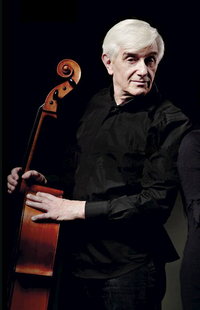 Dmitry Ferschtman (Moscow, 1945) is a Russian-Dutch cellist. He started his musical education at a very early age at the Central Music School in the same city, and continued his training at the Conservatory of Moscow from 1964, where he studied with Galina Kozoloepova and Natalia Gutman. In his second year at the conservatory, he co-founded, with Misha Geller, among others, the Glinka String Quartet, which performed from 1966 to 1978 and with which he gave hundreds of concerts in the Soviet Union and abroad. With this quartet he won first prize at an international string quartet competition in Belgium in 1969. He also performed as a soloist.

From 1969 to 1973 Dmitry Ferschtman was a teacher of chamber music at the Conservatory of Moscow. In 1975 he took part in a recording of work by Shostakovich, conducted by the composer himself several weeks before his death. In 1978 he emigrated with his wife, the pianist Mila Baslawskaja, from the Soviet Union to the Netherlands, where their daughter, the violinist Liza Ferschtman, was born one year later.

In the Netherlands he began a new career as a soloist and teacher. As a soloist he has played with conductors such as Frans Brüggen, Kenneth Montgomery, and Edo de Waart. Also, he is active in several chamber music ensembles and founded the new Glinka Quartet. He forms a duo with his wife Mila Baslawskaja, with whom he recorded works of, among others, Myaskovski, Schnittke, Shostakovich, Debussy, and Franck. With the pianist Ronald Brautigam he recorded works by Prokofiev; the CD received a 10 in music magazine Luister.

Dmitri Ferschtman is a principal subject teacher of cello at the Conservatorium van Amsterdam and the Royal Conservatory of The Hague. Also, he is often a guest at international festivals and gives masterclasses in Germany, France, and Japan. Furthermore, he had served on the faculty of The International Holland Music Sessions since 1993. His students include Pepijn Meeuws, Maarten Mostert, Vincent de Kort, Doris Hochscheid, Larissa Groeneveld, Quirine Viersen, and Wouter Mijnders.