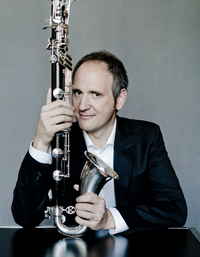 Bass clarinettist Davide Lattuada studied at the Giuseppe Verdi Conservatory of Milan. His teachers Lorenzo Guzzoni, Rocco Parisi, Mate Bekavac and Hubertus Rudolf Verheij were of particular importance for his musical and artistic development.
From 1998 he regularly performed with the Orchestra del Teatro alla Scala and the Philharmonie of the same name. In 2005-2006 he was a member of the Orchestra dell'Accademia Nazionale di Santa Cecilia, after which he joined the Royal Concertgebouw Orchestra in Amsterdam in 2006. Since 2016, he has also been part of the Lucerne Festival Orchestra at the invitation of Riccardo Chailly.