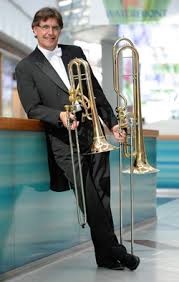 Ben van Dijk graduated with distinction from the Royal Conservatoire of The Hague, which made him the first bass trombonist in the Netherlands to obtain a conservatory degree. During his studies he played the tenor trombone in all Dutch radio orchestras and the bass trombone in the Radio Filharmonic Orchestra. Also, he was a member of the Rotterdam Philharmonic Orchestra, the Netherlands Wind Ensemble, the Dutch Brass Sextet and the Dutch Jazz Orchestra. In 2003 he won the prestigious ITA Award.

Ben van Dijk teaches at the Conservatorium van Amsterdam. Additionally, he taught at the conservatories of Zwolle, Hilversum, Rotterdam and the Royal Northern College of Music in Manchester. He has given masterclasses all over the world.