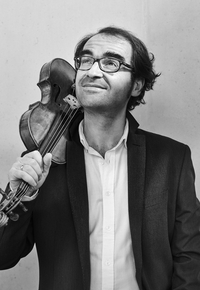 In 2014 David joined the teaching staff at the Conservatorium van Amsterdam as a teacher of violin for the master’s degree profile in orchestra playing. Additionally, he is regularly invited to teach at the National Youth Orchestra of Spain (JONDE). In 2015, David was artistic director of the Academia Sarasate in Pamplona (Spain) where he developed and led a pedagogical orchestra project for young musicians, in collaboration with the Symphony Orchestra of Navarra.

From 2007-2014 David was manager and artistic leader of the international summer course for string players ‘Verano Musical’ in Spain, which drew over four hundred participants from twelve different countries.
In the capacity of principal violinist David has played in many national and international orchestras, such as the Gelders Orkest, the Philharmony of Antwerp, Holland Symfonia, Het Ballet Orkest, La Orquesta de la Ciudad Granada, the Vallés symphony orchestra and the Mediterranean symphony orchestra.

David studied in Barcelona and Vienna, obtaining his soloist’s diploma with Maighread McCrann. In 1994 he won the prize for Spanish music ‘Joaquín Rodrigo’ in Santiago de Compostela. In 1997 he recorded the duo’s for two violins by Béla Bartók and Sergei Prokofiev for Radio Clásica, the Spanish national classical radio channel. In the same year David became concertmaster of the Sinfónica Juvenil Iberoamericana UNESCO-CAB and joined the Gustav Mahler Jugend Orchester. With this orchestra he toured Europe with Claudio Abbado, Pierre Boulez, Daniele Gatti and Kent Nagano, among others. Together with pianist Ana Sánchez Donate David recorded the complete works for violin and piano by Joaquín Turina, for the Verso label.

Additionally, David is an expert in social media. For four years he has been writing a blog (www.davidperalta.es, www.davidperalta.nl) and giving lectures, courses and advice on the use of modern communication tools in the world of classical music.