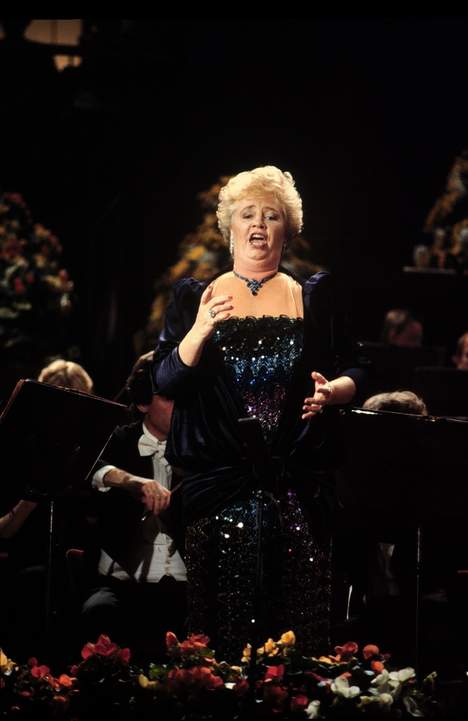 Deutekom, one of the Netherlands' greatest opera singers, fell awkwardly last Saturday, went into a coma and died in hospital.

She was born in Amsterdam in 1931 as Christine Engel, and made her breakthrough in 1963 as the Queen of the Night in Mozart's The Magic Flute at the Dutch National Opera.

During her career, she sang all the great bel canto roles and the dramatic roles in Verdi's operas including Lady Macbeth.

Her stage career ended in 1986 when she suffered a heart attack but she continued to give master classes internationally.

Cristina Deutekom was born in Amsterdam on August 28th, 1931 as Christine Engel. Although not from a musical background, the love for music and particularly for opera was instilled in her at a very early age by her parents, who were both amateur singers. Sundays were spent listening to operatic records and radio broadcasts and at the age of five, she already appeared in childern’s operettas.

She studied at the Conservatorium van Amsterdam with Coby Riemersma and Felix Hupka. In 1963 she made her debut with the Netherlands Opera as ‘Queen of the Night” in Mozart’s The Magic Flute. After some lesser roles with the company, she contemplated giving up singing altogether, since her carreer did not seem to progress.

During a perfomance of Der Rosenkavalier in Spain –in which she was singing the small role of ‘Marianne Leitmetzerin’- Christine was overheard warming up in her dressing room by Elisabeth Schwarzkopf -who was singing the ‘Marschallin’ in that night’s performance- with the difficult ‘Queen of the Night’-aria. Story has it that Schwarzkopf opened the door and asked: “Child, do you know what you are singing there?” and was shocked to hear that she was not performing this role all over the world. “I do not think much of any impresario, that does not recognize such talent”, she said and introduced her to her own manager, Rudi Rothenberg.

Soon after that, Christine Deutekom conquered the major opera houses in succession with the ‘Queen of the Night’. She appeared in Munich, Frankfurt, Barcelona, Milan and London, where the authoritative “Opera"-magazine reviewed her performance as follows: ,,Except for Maria Callas in her prime, we have hardly heard anything of equal quality here before". In 1969 she took to the Metropolitan Opera, New York and was acclaimed by the New York Times to be “the greatest Queen of the Night of our time”.

After singing mainly Mozart roles for the first years of her career, she extended her repertoire to include the belcanto roles. Meanwhile, her name was changed at the instance of her manager to the more Italianate Cristina.

After her debut at La Fenice in Venice, she was nicknamed “l'Usignuolo olandese” – the Dutch Nightingale. Later, she would simply be referred to by the Italians as "La Voce" - The Voice. She conquered Italy as ‘Elvira’ in I puritani and as Lucia di Lammermoor. Next, theatres would sell out over her Verdi-herions, Norma and Armida (being the first to sing this role since Callas). She was acclaimed “Singer of the Year” in Italy two years running.

In 1974 she opened the Metropolitan Opera House season as ‘Elena’ in I vespri siciliani, together with Placido Domingo. She appeared with all the leading tenors of that time, such as Franco Corelli, Luciano Pavarotti, Placido Domingo, José Carreras, Alfredo Kraus, Carlo Bergonzi, Richard Tucker and Nicolai Gedda and under the baton of maestros Carlo Franci, Antonino Votto, Mario Rossi, Riccardo Muti, Nello Santi, James Levine, Bruno Bartoletti and George Solti.

Her voice was that of a 'coloratura drammatica', although it has been remarked that 'lirico spinto with an increadible coloratura technique' would probably be more accurate.

After having sung all the major roles of her Fach, she ventured into even more dramatic repertoire with roles such as Medea, ‘Lady Macbeth’ (Macbeth), ‘Abigaile’ (Nabucco) and finally even Turandot. After a series of triumphant successes as ‘Abigaile’ in Canada, she was honoured to be Freeman of the City Winnipeg in 1981.

In 1985, she was forced to end her active singing career after a heart attack.

She since has worked on radio programs, as guest-professor at the Royal Conservatory in The Hague, giving masterclasses and judging on singing competitions. The "Cristina Deutekom Competion" was named in her honour.