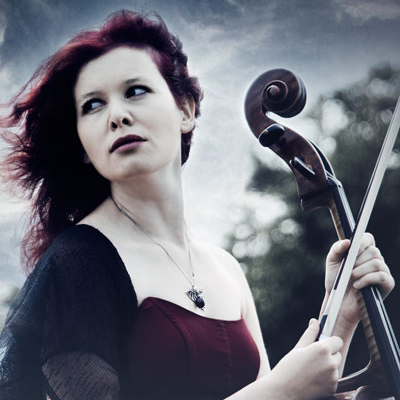 My advice to a new student would be to trust fully to one's musical intuition and not be afraid of taking the freedom to experiment.

The area of creative arrangement might become a great source of inspiration especially for performers.

Since an early age I was following my passion for performing and recording music. My special attention has always been directed towards discovering new cello repertoire. For the last two years I developed an urge to analyse large dramatic musical forms, e.g. operas, which resulted in a successful arrangement of Prokofiev's opera "The Fiery Angel".

The music of Sergei Prokofiev, and especially his opera 'The Fiery Angel', inspired me greatly. My inspiration led me to creating my creative interpretation of this fundamental work.

The PhD Thesis by Christina Guillaumier 'From Piano To Stage: Genealogy Of Musical Ideas In The Piano Works By Sergei Prokofiev (1909 - c.1920)' brought me many insights concerning Prokofiev's compositional techniques.

I see myself as a performer and arranger. I would be happy if through my arrangement I can raise interest to the original, thus making Prokofiev's work known to a bigger audience.

The subject of my research is my own arrangement for cello and piano of Prokofiev's opera The Fiery Angel, which is epitomized in a half-hour piece of music, consisting of four movements, which roughly follow and describe the events of the opera.

Since this arrangement is a programmatic piece, but without text and visuals helping to define the characters, all characterisation is dependent on the restructuring of the content of the opera, instrumentation and the mastery of a performer. The performer should become a storyteller, an actor, who constantly switches between the personalities with a plasticity determined by theatrical rhythm.

Since there are no precedents of this kind of work with Prokofiev's operatic music, this research might open new perspectives for the creative interpretation of Prokofiev's musical heritage.

Collaboration with composer Jyoti Verhoeff. Together they released albums 'Phoenix' and 'Riven'.

Recording of her own arrangement of Prokofiev's opera The Fiery Angel at the MCO;

Master and Margarita; a music theatre project which will take place at the Cello Biennale 2016.