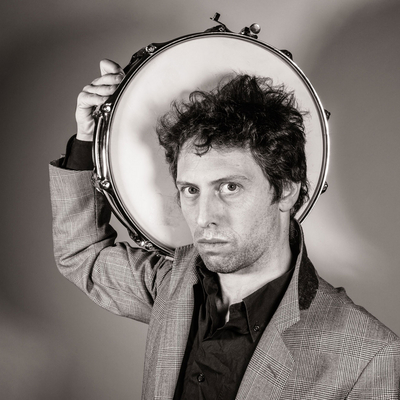 The Jazz Department is a very flexible stage where you can create a program that fits your artistic ambitions. Take your time to check the possibilities and explore the limits on it. Make it the outmost useful time of your life!

I’m an “internacional” Musician by definition. My father was Italian and my mother descendent of Spanish family.  I grew up in Buenos Aires, seduced by different music genres (listening grunge and South-American folk, funk, tango and free jazz). In my youth I was particularly influenced by my contact with jazz-men in Buenos Aires. I moved to Amsterdam to complete my formal studies at the Conservatorium. Until then I was a self-thought drummer and I had a lot of “gaps” in my knowledge (many of them still remind :9). The CvA helped me to feel much more complete as a musician and gave me the tools to face a professional career in Europe. Thanks to this journey, I also encountered the improv-music scene of Amsterdam, a very vivid and sparkling international music scene.

I love working with other enthusiastic musicians, people who’s given to the creative process without prejudgments, open to hear new ideas, to grow and have fun. I love it. I’ve met most of my network at the Conservatorium van Amsterdam and I keep on working with new students and just graduated musicians. Since I graduated I’m working to bring my projects to play in European Festivals and venues.

The study programme
Together with Valeria Primost (Dance student at the CvA at that time), we started researching into interdisciplinary improvisation in 2003 and we gathered a group of musicians and dancers called "Zap Collective", with whom we performed at Muiderpoort Theather, Overtoom 301, a.o. One year later, we co-founded and curated The Meeting Point, a monthly lab of music & dance improvisation run at Bimhuis between 2004 and 2006. After our internship, The lab was re-named as Monday Match and run till June 2018.

In 2006 I became member of Stichting Trytone, a Musicians Collective and record label dedicated to promote creative music. From 2006 till 2012 I was the programmer of Trytone Festival at Zaal100, a concert series running twice a month.

Before that, from 2002 to 2006 we associated with Guillermo Celano to organise weekly jam sessions with a personal flavour, making emphasis on creative/original music. We had to change locations many times, going though different cafés and restaurants in Amsterdam. I can remember Bar West in 1e Helmersstraat, De Fles in Vijzelstraat, Aran Irish Pub in Max Euweplein, Hunters Coffeeshop in Utrechtsestraat and Café de Vergulde Gaper in Prinsengracht.

These internships brought me in contact with a lot of great musicians form Amsterdam, the whole Netherlands and abroad and on a way, they taught me how to organise artistic activities. I’m still part of Trytone Collective, our label has more than 50 releases and we are an active foundation supporting the music scene in Amsterdam.

The whole study program was a great experience for me. I could mention among others the department of Composition through non western techniques (Indian Music) lead by Rafael Reina and the workshops of African drumming given by Victor Oscar, one of the greatest drum teachers at that time at the school, may rest in peace, certainly a big loss for the educational community.

Future
My future plans are making music. Keep on meeting musicians who might be interested on making music together and bring our projects to an ever growing audience. Keep on growing musically. Keep on building a significant international career.

Music is an art and is a language. Art and language are means of communication. Music is always-moving; I’m always trying to surprise my self, to find new expressive ways, exploring the limits. I love to improvise and to compose, and I love the combination of both. There is a huge potential being explored there: from the chaos to the order, from the guts to the brain, from the conscious to the unconscious.
There it is, the point where musicians become mediums.

African-South American rhythms and the drum-set

A relationship develop through jazz concepts
Performance with program notes

The mix of cultures in the American continent has had a tremendous impact on the western music of the last two centuries. Few examples of this are the styles called blues, jazz, salsa, rumba, tango, bossa nova and samba. The African influence has set a common ground on the post colonial music of the whole American Continent. From the lands where now Venezuela  is, until the Southern Argentina,  there is a number of musical styles that can be easily recognised as African influenced styles blended with an American-Spanish flavour, known as “criollo”. Rhythms such as festejo, joropo, lando, chacarera,  zamba, candombe, murga and chamamé are very clear examples of this mix. But, as far as I know, there is no clear translation of South American rhythms into the drum set.

I tighten my investigation to a small part of the South American music through 2 main ideas:
1-The general development of 3/4 - 6/8 bar patterns in the Spanish colonies.
2-The Argentinean and the Peruvian folk music, their similitudes and differences.

I did present the work orally and filled the presentation with historical notes, explanations and comments. Together with a specially set combo, we performed a selection of material though which we made notable the relation of folk-traditional SouthAmerican music with jazz & improvised music. Part of the material was original compositions and part traditional music. There were different proportions of fusion, going from pure traditional approach in the original percussion (cajón, bombo) to a modern jazz development on the drum set. We closed with a brief Q&A open discussion. The mark for my thesis was 9,5.

I will be always grateful to the musicians that worked on the arrangements, played the music and shared the adventure with me. Nuria Garcia: Voice. Aleix de Gisper: Guitar. Felix Hildebrand: Double Bass. And also grateful to the committee of teachers present there: Ruth van Dijk, Gerhard Jeltes and Victor Oscam.