Maydays is the Pop Department's annual exam festival. In May, the graduating pop students present the results of four years of training at various pop venues in Amsterdam. The students produce these evenings themselves: they program a show featuring only original music and they also take care of production and promotion. Maydays offers a great opportunity to see and hear the newest pop acts from The Netherlands! 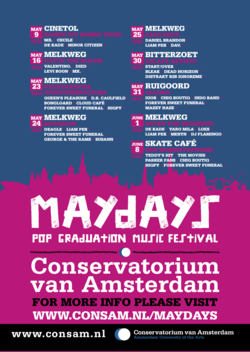 Samen Uit Samen Thuis* is the graduation show of Hessel Visser, Thomas Curvers and Tisha Smit. They started at the Amsterdam conservatory by auditioning together, studied together for four years and now they’re of course graduating together. The title of this night was already chosen way before the event even became a reality. The three friends and bandmates will all debut new projects, and they will close the night -very much on brand- together, performing as Minor Citizen. It’s going to be an amazing night, with eclectic new acts, so get yourself a ticket as soon as you can.

*SAMEN UIT SAMEN THUIS literally means “out together, at home together”. It’s a Dutch saying, which roughly translates to “we’re in this together”

Catch the Bloom is an evenning organised by Levi Boon and Stijn Grul.