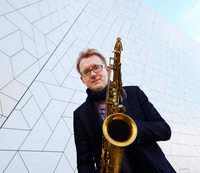 Jasper Blom (1965) is a leading tenor and soprano saxophonist of the Dutch jazz scene and one of the most versatile players in the Benelux. He has performed with Lee Konitz, Chet Baker, Nat Adderley, Bob Brookmeyer, George Duke, Randy Crawford, David Liebman, Conrad Herwig, Dick Oatts and many other international renowned artists. He has won the European Jazz Competition twice and has played at major jazz festivals and clubs around the world.

Jasper Blom has received composition assignments from the North Sea Jazz Festival, the Jazz International Rotterdam Festival and the International Saxophone Festival SAX14. As a leader he has recorded eight CDs with material ranging from energetic hardbop to free open improvised music.

Jasper Blom is currently active as a player and composer of both contemporary improvised music and jazz, can be heard regularly throughout the Netherlands and Europe as an active player in different musical settings and teaches jazz saxophone at the Conservatorium van Amsterdam.

Jasper Blom is a member of the contemporary Big Band of David Kweksilber, which features some of the leading improvisers of the Dutch impro scene like Wolter Wierbos, Guus Jansen Peter van Bergen and many other bands such as Krupa and the Genes (a Dutch all star double band) and WonderYears (a trio featuring the music of Stevie Wonder). He is frequently asked by Dutch top ensembles like the Metropole Orchestra and the Jazz Orchestra of the Concertgebouw to participate in studio recordings and live sessions.