The DAW is an example of music technology which has a big influence on the artistic imagination, and on the traditional relationship between the composer, performer and producer. In its application, it triggers novel and unexpected creative processes. The creation of pop and film music being almost unthinkable without the DAW, in the world of classical music it also increasingly influences creation processes, and the performance practice as a result.

The PhD research project of composer and performer Arnold Marinissen into DAW-related creation processes and artistic implications of this digital platform fits into the focus on the effects of data technology and new media on culture and society. It also links up with the increasing interest from other domains in artistic practice leading the way in innovative thinking and acting. Marinissen's research will feed the discussion about work processes, aesthetic criteria and professional benchmarks which will be leading in the field of music education. 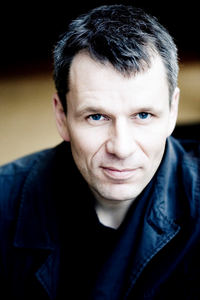 Composer and percussionist Arnold Marinissen (1966) studied Classical percussion ar the Royal Conservatoire The Hague, where he graduated with distinction in 1991, receiving the prize for the best exam of the year. Since 2008, he has be a principal subject teacher at the Conservatorium van Amsterdam. As percussionist, Marinissen has been Artist in Residence at De Doelen, Rotterdam, and, together with ex-Frank Zappa drummer Terry Bozzio, at the Traces of Rhythm Festival in Tilburg. He performed as a soloist with many orchestras and ensembles at home and abroad.
Arnold Marinissen has been Artistic Director of Slagwerk Den Haag. Together with Antony Fiumara he founded ensemble Lunapark/Lunatree. He programmed the 2012-2013 season for Muziekgebouw aan 't IJ and four editions of the World Minimal Music Festival. Additionally, he is advisor to the TROMP International Percussion Competition.
Arnold Marinissen composed works for  ensembles and artists including Asko|Schönberg, the Nederlands Kamerkoor, the Storioni Trio, Slagwerk Den Haag, VocaalLAB/Silbersee, Oorkaan, Calefax Rietkwintet, Lunatree, the Ives Ensemble, Prisma Strijktrio, cellist Katharina Gross, the Asko Kamerkoor, the Orgelpark, and percussion duo Niek KleinJan and  Konstantyn Napolov. He also wrote several works for choreographer and dancer Ederson Rodriguez Xavier.

PhD research, supported by the AHK/CvA